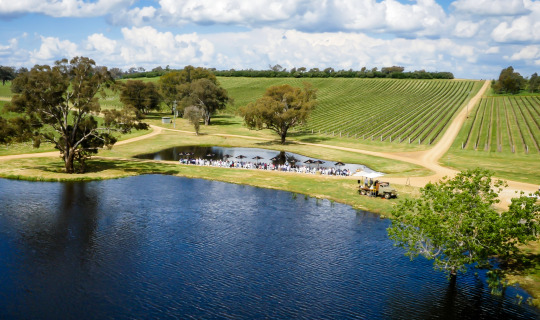 Angullong Wines was established in 1998 with Shiraz one of the first varieties to be planted. Today, Angullong has one of the largest holdings of Shiraz vines in the region.

Angullong is a well-known, historic property that has been instrumental in wool and lamb production since the early 1900s. Angullong prime sheep were recorded to top the Homebush markets from the turn of the century and later, in the 1920s, the property was shearing 30,000 sheep annually.

As with all stories of the Australian bush, resilience, innovation and determination come to the fore. During 1932 the property was razed by fire, with 4000 acres of grassland burnt.  In 1934 the Station Manager, a returned serviceman who had seen action at Passchendale and the Somme, was found dead with his revolver by his side. Only three years later, in 1937, a young Angullong station cook and laundress was murdered by a young farmhand on the property.

Since 1950 the history of Angullong has been more sedate. Under the ownership of the Crossing family, the Angullong property has farmed cattle and, for the last 22 years, grown grapes and made wine.

Under the innovative guidance of the Crossing family the vineyards were planted with a range of traditional varieties along with emerging varieties. While Angullong has built a reputation with its emerging varieties, its shiraz, cabernet sauvignon and merlot are very suited to the lower reaches of Orange’s high elevation vines.

With a number of excellent vintages Angullong has battled the dire effects of drought. While the quality of fruit has remained high, the volume has been affected. The recent rains have built confidence for a good 2021 vintage, with full dams and soil moisture.

“These varieties grow well at a 600-metre elevation,” said owner and General Manager Ben Crossing. “The 600-metre boundary around Orange’s Mount Canobolas is slightly warmer than the higher vineyards at 1000 metres.

“Whilst still very much cool climate, and higher than most vineyards in Australia, these reds are able to fully ripen. They produce cool climate characters, finesse and elegance. The wines are medium bodied, with the slow ripening and extended sunshine hours increasing phenolic levels which build flavour, colour and texture of the wine.”