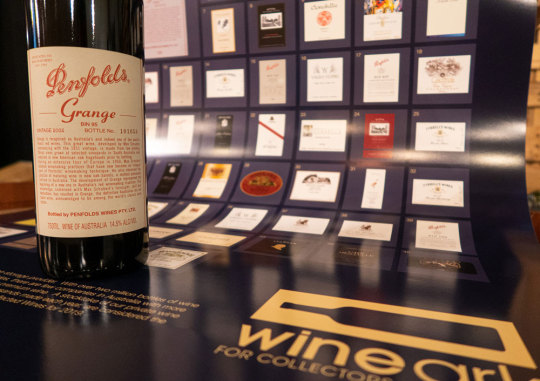 Wine Ark, Australia’s largest wine storage provider and retailer of vintage wines, has released its highly anticipated report card on wine collecting in Australia – Australia’s Most Collected Wines 2019 – with Penfolds Grange reclaiming first place as the most collected wine in the country.

Wine Ark’s Most Collected Wines is a survey of its Australian cellars which hold over two million bottles of wine in climate-controlled conditions for thousands of collectors based in over 30 countries.

The list of the 50 most collectable wines is the only longitudinal report of its kind in the country that measures the tastes of Australian wine collectors and the contents of their wine cellars.

The list of the 50 most collectable wines, released every three years since 2006, has become the barometer on wine collecting in Australia and the results show emerging trends in the tastes of Australian wine collectors.

For the 2019 edition of Australia’s Most Collectable Wines there has been a number of trends which show that Australian wine collecting habits are changing at a rapid pace.

John Cuff, of Wine Ark, said, “Due to the sheer numbers of bottles in the count, it takes a lot of movement to shift wines in the Top 10. The rise of Penfolds Grange, one of the most expensive wines in Australia, at the expense of Penfolds Bin 389, again emphasises the importance of this iconic wine to Australian wine collectors”.

It was though not all good news for Penfolds and other very well-established wineries, despite Penfolds still having the most entries in the Top 50 (8).

“Having worked on every incarnation of Australia’s Most Collected wines over the past 10 years we are seeing a clear shift away from large wineries to more niche winemakers. The popularity of old cellar staples of Penfolds, Wynns and Lindemans is falling while a new breed of wineries is rising quickly.

“These include Tyrrell’s, Rockford, Turkey Flat and Tolpuddle Vineyard. What must be worrying for Treasury Wine Estates is the fact that of the 13 wines in the Top 50, all but three have moved down,” said Cuff.

Shiraz still remains at the core of Australian wine cellars making up half the wines in Australia’s Most Collected Wines 2019 Top 50 with the number of bottles increasing by 11% in the last three years.

Another clear change in Australian cellars has been the increasing interest in wine from many cooler climates with Tasmania up by an impressive 175% and the Yarra Valley up by 47%.

This is also illustrated by the rising fortunes of wines from Mount Mary, Yarra Yering and, in particular, Tasmania’s Tolpuddle Vineyard Pinot Noir which was the fastmover in 2019, up 101 places to enter the top 50, again showing the increased interest by collectors in more niche wines.

”When we bought the property in 2011 we believed that Tolpuddle Vineyard had the potential to be one of Australia’s great single vineyards. Tolpuddle is a special vineyard making small quantities of highly acclaimed individual wines from an interesting place. You can understand our excitement.”

Summing up Cuff said, “While the amount of wines from the Barossa Valley are up 26% since our last survey, it is still clear that there is a distinct move in the nation’s wine cellar toward more elegant, cool climate wines from small winemakers.”

A quick snapshot of Wine Ark’s list of Australia’s Most Collected Wines 2019:

All the details of Australia’s Most Collected Wines can be found at here.