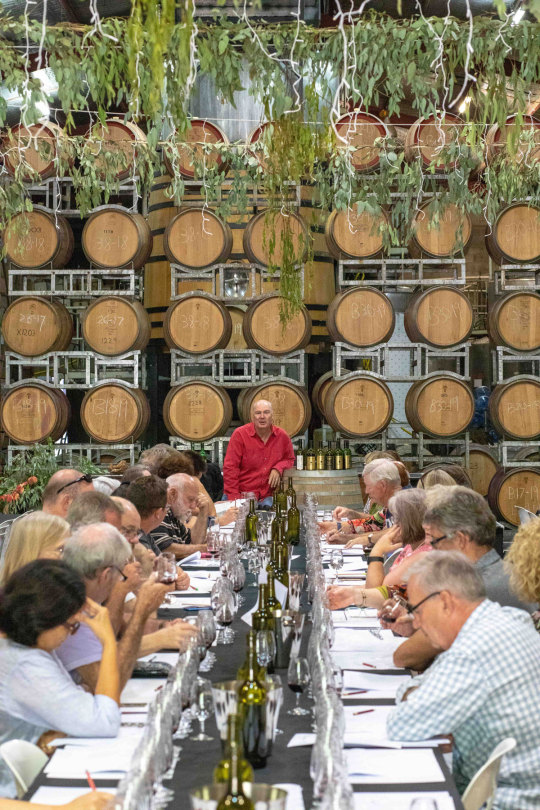 In 50 years Huntington Estate has only had only two chief winemakers; founder Bob Roberts and current custodian Tim Stevens. Bob and his wife Wendy united with Tim and Nicky Stevens at the recent celebration to mark the winery’s half century.

The 2017 Tim Stevens Shiraz Cabernet is the latest release of owner and winemaker Tim Stevens’ Signature label. Tim began developing this wine style at his previous winery, Abercorn (neighbouring Huntington). The wines are more modern and extroverted than the classic styles of Huntington Estate. Eminently age worthy, this quintessential Australian blend was first released in 2001 as Tim’s ‘Growers Revenge’.

The original ‘Growers Revenge’, was a blend of Cabernet Sauvignon, Shiraz and Merlot from Mudgee’s leading small grape growers who struggled to realise the true value of their grapes from the corporate buyers; this multi trophy winning wine was their revenge and proof of the quality of the fruit. The current vintage is made from Huntington Estate grapes.

The 2016 Huntington Estate ‘Basket Dried’ Shiraz was made using the Amarone method. “In 2011 I experimented with hand-picking the grapes early and drying them in baskets to slowly remove the water and concentrate sugars and flavours until they reached 14.5 to 15 Baumé. The floral, fruity and peppery flavours I was after persisted while the grapes ripened and a new Huntington Estate premium Shiraz was born.”

Fortified Shiraz is not a new wine for Huntington Estate, a fine example from 1979 was opened at the 50th, and it has been winning trophies at the Mudgee Show for decades, with golds and silvers at Rutherglen, the home of Fortified wine. “It is the ultimate ageing style of wine,” commented Tim. “We are one of a few remaining advocates of the style and are intent on securing its future with new audiences. Our customers really enjoy it with chocolate berry desserts, as well the more traditional pairing with cheese.”

The wine was made from grapes grown on some of the winery’s oldest vines. It was then fortified with five year old, oak-aged brandy spirit. “This is a generous wine that will cellar well for the next 30 years plus.”

HuntingtonEstate is one of Mudgee and NSW’s most respected winegrowers. Established 50 years ago, in 1969 by Bob and Wendy Roberts, the winery is an icon of the region.Current owners Tim and Nicky Stevens continue to run the business with five guiding principles; the wines are Estate grown, made & bottled; wines are built to age; reds are released at four to five years of age; the wine is only sold direct, and; substance over style.